Diocese of Arundel and Brighton 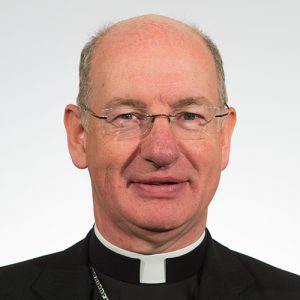 Bishop Richard was born in Chingola, Zambia on 1958. He was brought up in Kent and, after leaving The Judd School, Tonbridge, began formation at St. John’s Seminary, Wonersh. He was ordained Priest on 3rd July 1982.

He served as Private Secretary to Archbishop Michael Bowen from 1992 until 2001, during which time he was also President of the Interdiocesan Tribunal of Second Instance of Southwark and Vocations Director. In 2001 he was appointed Vicar General and Chancellor of the Diocese.

In addition to his role as Bishop of the Armed Forces, he is Chair of Governors at St. Mary’s University, Twickenham, Liaison Bishop for Prisons and for the National Catholic Scout Fellowship and holds a brief on Mental Health on behalf of the Bishops’ Conference of England and Wales.

Bishop Richard has been a Benedictine Oblate for over 30 years and is a member of the Equestrian Order of the Holy Sepulchre of Jerusalem, with whom he has travelled many times to the Holy Land. He enjoys horse riding and walking.